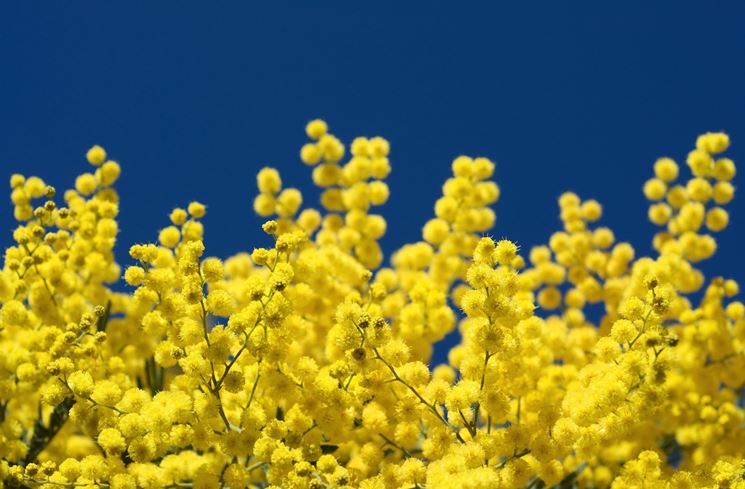 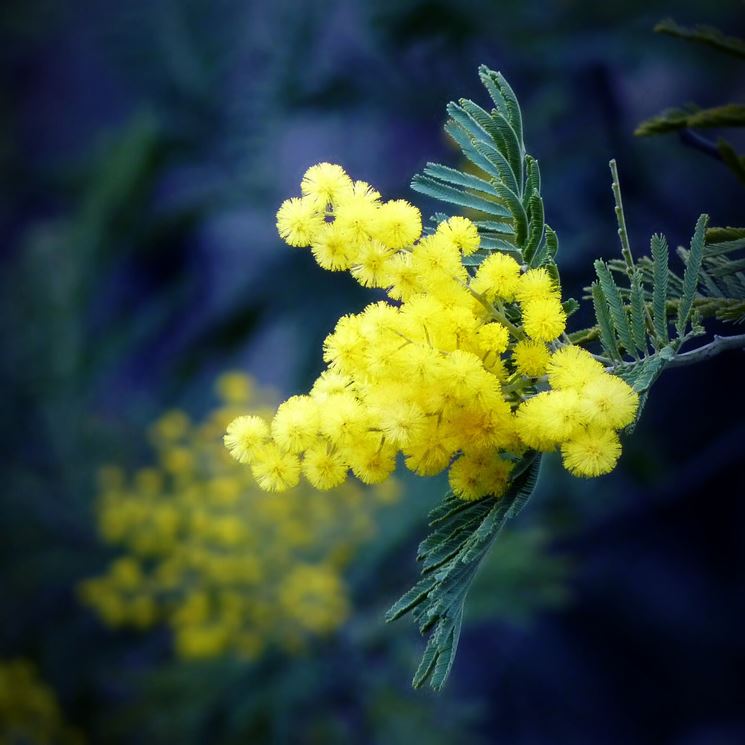 The ideal soil for flowering is the one which tends to be acidic, with a good structure, which ensures good humidity, but at the same time good drainage. It is advisable to bring organic matter (humus) periodically (once a year), this is both to ensure the plant the right amount of nutrients, and to improve the structure of the soil. Mimosas with phyllites are more resistant to poorly acidic soils.

The best period for planting mimosa is from October to March. In colder areas it can be grown in greenhouses with the care not to bring the temperature below 0 degrees. The pot must be changed about every two years. Remember that the diameter of the pot must not grow too much, both for aesthetic reasons and to maintain a proper proportion between the aerial and radical apparatus.

The acacia dealbata is a medium-sized tree: generally, in the places of origin, it does not exceed 20 meters in height, while in our country it is rare that it reaches 5. The canopy takes on a wide cone shape over the years. The leaves, which tend to be persistent, are bipinnate, up to 12 cm long, divided into several linear leaves, about 5 mm long. These, not toothed, are, on the contrary, slightly hairy and of blue-green colour.

The bark is smooth and goes from green to glaucous, but, as the years go by, it progressively darkens until it becomes almost black. The flowers, produced by the end of February, are very small, with bright yellow petals and numerous showy and very perfumed stamens. They gather in large clusters, evolving later on in pods about 8 cm long, flat, initially glaucous, then brown when ripe.

The growth is very rapid (even 60 cm per year), but the average life of a specimen is rather short (rarely over 50 years). Moreover, they are often severely damaged by winters with temperatures below average: it is in fact a tree rather sensitive to low temperatures. The cultivation in the open land is convenient only where the climate is particularly mild. Elsewhere, however, it is possible to keep the specimens in large pots, making careful pruning.

This species is the most common in our country, but in cultivation there are many others and may vary both the appearance and some characteristics.

The mimosa, in order to grow and bloom at its best, needs high temperatures, a lot of sun and well drained soils. In winter, temperatures should never fall below 5 °C, so that the plant does not suffer damage. The most serious problems, however, can arise in the presence of frosts, in particular with temperatures between zero and -3 ° C.

From this point of view, even icy winds should be avoided: if we therefore live in an area with a not totally mild climate, it is better to plant the trees in an area that is as sheltered as possible, perhaps near a wall facing south.

It does not tolerate clayey or heavy substrates at all, especially if they are characterized by the strong presence of calcium: in fact, the onset of leaf chlorosis is very common, which affects the overall vitality of the tree.

Light, sandy soils or soils with an acidic pH are preferable.

There are many uses: both as an isolated specimen, and for the creation of groves (perhaps by varying the species, so as to extend the flowering period). But let’s distance them at least 4 meters, because the superficial roots tend to occupy a very large area and sometimes cause the deterioration of what surrounds them. In this context, special attention should also be paid to monitoring them if they get too close from a building.

It is also nice to create hedges along the coasts or to use the length of the branches to use them as creepers: they can easily cover arches and pergolas.

Planting takes place from autumn to spring. It is almost everywhere advisable to proceed in spring, to avoid any frosts that could irreparably damage a young tree.

Mimosa in the middle of the earth

We dig a hole at least twice as wide and deep as the bread of the earth. On the bottom we create a thick draining layer with gravel or expanded clay beads. If our soil is rather compact, it is better to replace it completely or to mix a good quantity of river sand and a little peat.

It is important to insert at the same time the plant and a resistant brace, at the same depth, distant from the foot about 30 cm. After covering with the remaining substrate and having well compacted, tie the trunk in several places to the support. In the first years of life, in fact, the mimosas have a very superficial root system and the epigean part is also very fragile. Without a support it is frequent that the trees are uprooted by the wind or that the trunk breaks cleanly.

As with all members of the Leguminosae family, there is absolutely no need for nitrogen-based fertilisers and it is therefore necessary to avoid inserting manure or compost in the hole.

In the open ground it is not necessary to irrigate at this stage.

The specimens purchased are mostly grafted on Acacia retinoides. This species (also called Mimosa della quattro stagioni) is more resistant to cold and adapts well to calcareous soils. However, the grafting point is rather sensitive to rottenness and it is necessary to avoid that it touches the ground directly: let us therefore leave a distance of at least three cm.

How to grow mimosa in a pot 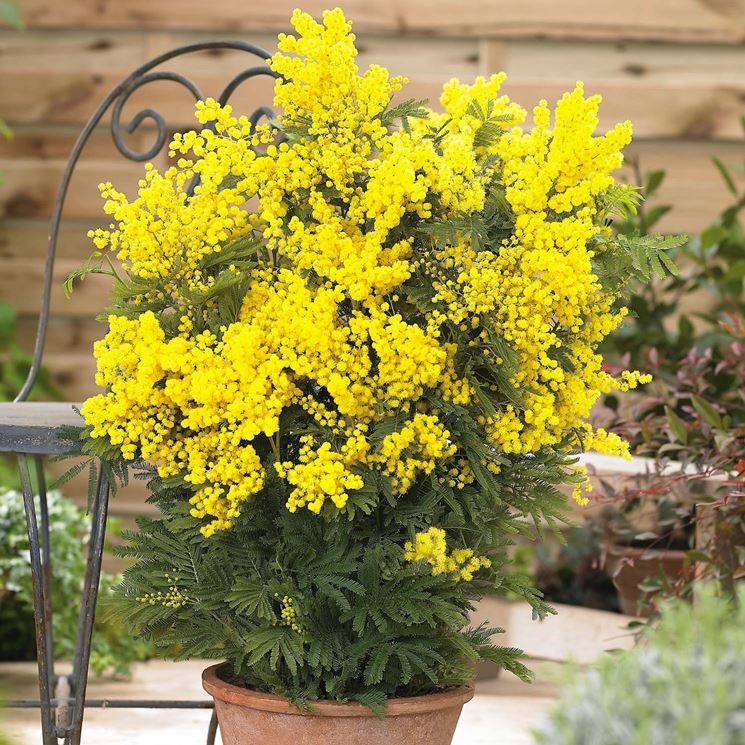 If we live in an area with a cold climate, we can choose to grow the the mimosa in a container. In this case, it is advisable to contact specialist dealers, possibly with varieties with a more limited development.

Let’s choose a container of adequate size (at least 40 cm deep): the root system becomes important in a short time and it is necessary to avoid having to resort often to repotting. In these conditions, the specimen generally manages to grow well up to a height of at least 3 metres.

On the bottom we have to create a thick draining layer with expanded clay. Then we create a substratum by mixing a generic soil with peat, in equal parts. If we want, we can add also a handful of coarse sand.

Let’s irrigate slightly and keep the substrate always slightly moist (but not wet!), especially from spring to autumn.

The specimens in the garden almost never need irrigation: on the contrary, it is necessary to avoid excessive humidity at the root level.

Young trees are very sensitive to low temperatures until the trunk is well lignified. The first few years can then be covered with one or more layers of non-woven fabric and create a thick mulch at the level of the foot.

Pruning is carried out in spring, at the end of flowering: this, in addition to encouraging a compact and harmonious growth will avoid the appearance of pods, unpleasant and, consequently, excessive self-dissemination.

It is also necessary to intervene frequently to eliminate jets from the foot that weaken the canopy.

At the end of the winter we can instead intervene by eliminating the branches that may be affected by the frost. 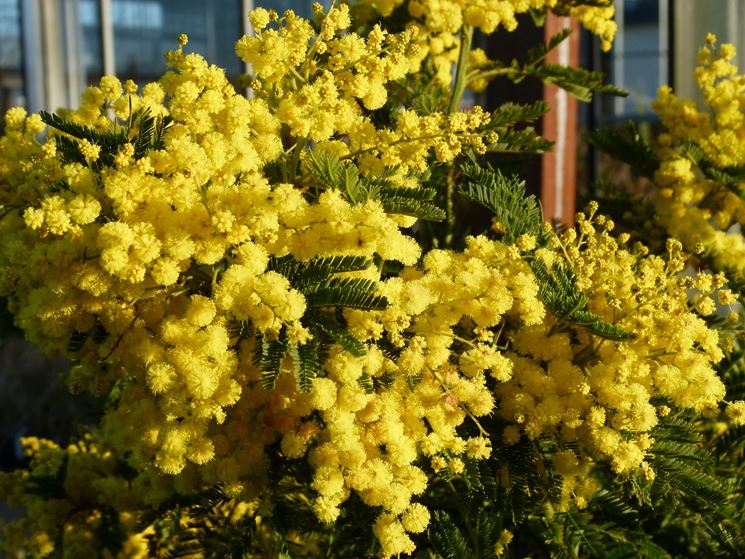 The flowers are picked between mid-February and the end of March: the bunches are picked when the first corollas begin to open: the bouquet will last longer once in our homes.

It’s a rather simple tree to multiply. You can proceed through it:

– Sowing in hot conditions: after leaving the seeds in boiling water for about 48 hours, they are planted on a hot bed (or outdoors, from April).

– Removal of radical suckers in the spring.

– Grafting: usually proceed by approximation using plants obtained from seed that are at least 18-20 months old (on a. retinoides.)

The most common parasites are cochineals and methacles.

The former are fought with white oil activated by insecticides possibly systemic.

The latter are prevented by choosing sunny exposures and often bathing the canopy. Powerful jets of water can also be useful in removing eggs and larvae, which are difficult to reach by insecticides due to the thick waxy layer that surrounds them.

Chlorosis is a common physiopathy: it is frequent, mainly on ungrafted plants, in soils with a neutral or alkaline pH. It is prevented by distributing from the end of winter abundant doses of iron sulphate (which helps to acidify). Two or three doses of iron sulphate are generally sufficient after 10 days. In the most serious cases, chelated iron can be used.

– dealbata: the most common. It grows quickly and produces large bunches of fragrant flowers. Beware of roots that can damage buildings and other trees!

– cardiophylla: dark yellow flowers, in April, and bronze foliage. Up to 3 m.

– aspera: Bright yellow flowers, between January and March. Silky leaves. Up to 2.5 m.

– retinodes small and fragrant flowers, in continuous production. Up to 3 meters. Rustic up to -7 ° C. Controllable roots. 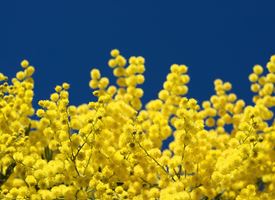 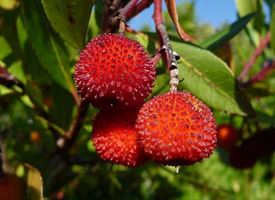 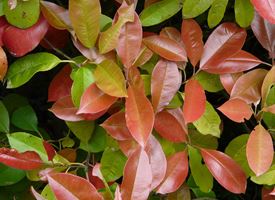 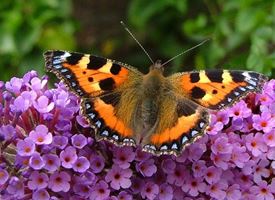