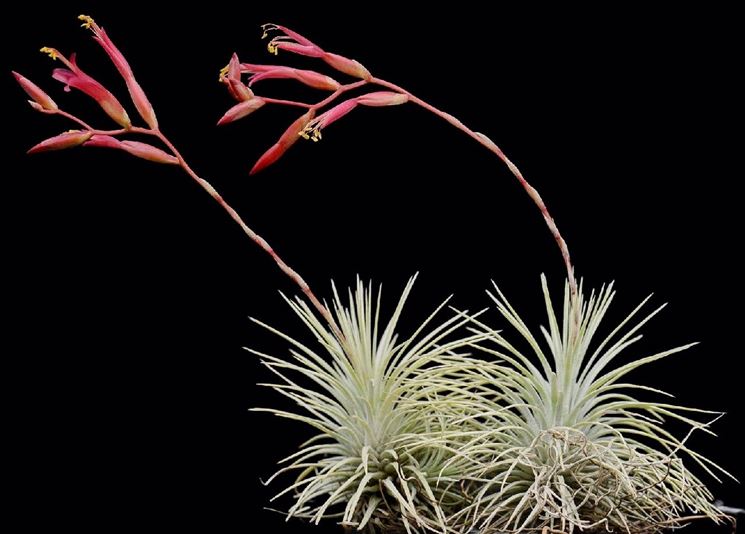 The rosette species propagate by the suckers the plant emits in summer, those hanging by division. It multiplies by detaching the shoots forming around the base of the plant, possibly provided with some roots, they fix on a new support and hang in a shaded place after having sprayed them with water.

Watering of Tillandsia argentea should be frequent in spring – summer, limited to as much water to keep the soil moist in winter, if the plant is in a poorly heated environment.

In summer, it is necessary to spray frequently, even twice a day, limescale-free water on the plant. It is important to fill the hollow in the centre of the leaf rosette with non-calcareous water, as this is the water reserve for silvery Tillandsia.

Every three or four weeks, a little liquid fertilizer is administered, dissolved in the irrigation water.

The plant of Tillandsia argentea should be kept away from the sun’s rays, especially in spring and summer; in winter it should be kept in a bright position but not exposed to direct sunlight.

Temperature: it does not tolerate temperature changes and air currents. In winter, the temperature must not fall below thirteen degrees. While for summer temperatures Tillandsia argentea can bear temperatures close to 30 degrees without any problems.

Aphids and cochineals are the most frequent parasites. The rot in the collar is due to fungi of the genus Fusarium, favoured by water stagnations. To eliminate the cochineals, if they are present in modest quantities, a good method is to use a cloth with alcohol to pass on the leaves. To combat aphids, the so-called lice, it is possible to intervene with specific products, or with the use of macerates based on nettle, to be sprayed on the affected plants without the use of chemicals.

Silvery tillandsia: forms a small compact rosette of ten to fifteen centimetres in height, formed by numerous thin, scaly, silvery-grey leaves. In summer, a twisted spike inflorescence emerges from the centre of the rosette, formed by red scaly bracts and purple flowers.

T. usneoides: suitable for pots and baskets to hang, produces thin, branched hanging stems, silvery green in colour due to the bloom covering the scaly leaves. The flowers, one centimetre long, range from yellow green to blue.