Apartment plant very widespread in Europe, there are dozens and dozens of species, all of them originating in South America. In cultivation in apartment we find mainly species and varieties of climbing type, with thin fleshy stems, which carry large oval leaves or heart-shaped, the particularity of the climbing philodendrons is to produce roots at each internode, with which they cling to any support. These species are cultivated climbing on a guardian, or hanging, placed in baskets to hang.

Some species with erect stems are also cultivated, with long sharp leaves, in particular those of small size or with particularly coloured foliage.

However, there are also erect philodendrons, of shrubby typology, with big finely incised leaves, or with page with irregular edges; these philodendrons are usually, however, utilized in the mild climate zones, in order to be cultivated in open air, or in cold greenhouse, seen that they can reach, in the years, very ample dimensions, “uncomfortable” for an apartment plant. The most diffused species are Philodendron scandens, Philodendron “Burgundy”, Philodendron andreanum.

In the wild, these plants produce also some flowers, which are often present also in the specimens inv aso, they are stocky inflorescences similar to callae; in the plants cultivated in open spaces for the flowers, follow big fruits, edible in most of the species. 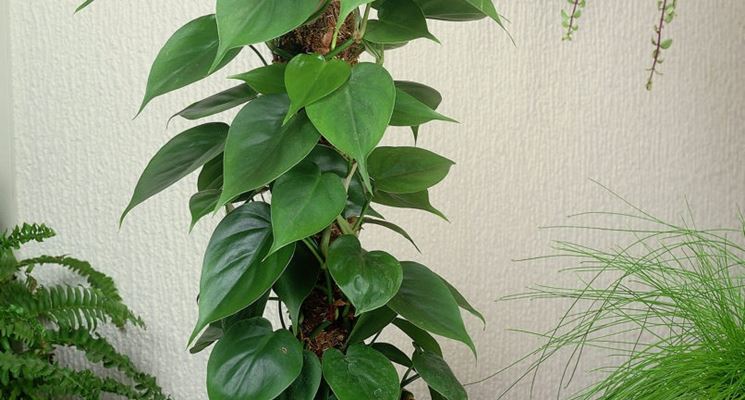 How they are grown 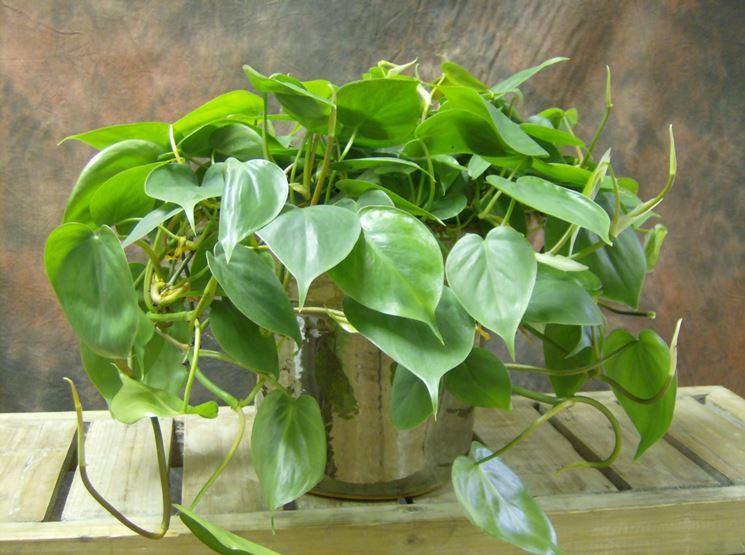 The name Philodendron comes from the Greek, and means “he loves trees”, this because in nature, the first discovered philodendrons climb using the trunk of tall trees as support; in order to be able to cultivate them in apartment, either we place them up, leaving them to fall, or we must, forcibly, equip them with a robust guardian. Plastic tubes covered with sponge or sphagnum are used, around which the plant produces its roots.

In order to be able to quench the thirst of the plant over time, it is best to keep the brace constantly moist, throughout the year; during the summer months we should also provide regular watering, avoiding letting the substrate of cultivation dry completely, which will be rich, soft, well drained, but fresh and moist.

During the winter months we can thin the watering a lot; these plants love a good ambient humidity, which is to be provided by often vaporizing the plant, its foliage and its guardian.

Although there are several species, the method of cultivation differs little from species to species. The only discrepancies may concern the greater or lesser tolerance of shade and/or low temperatures. 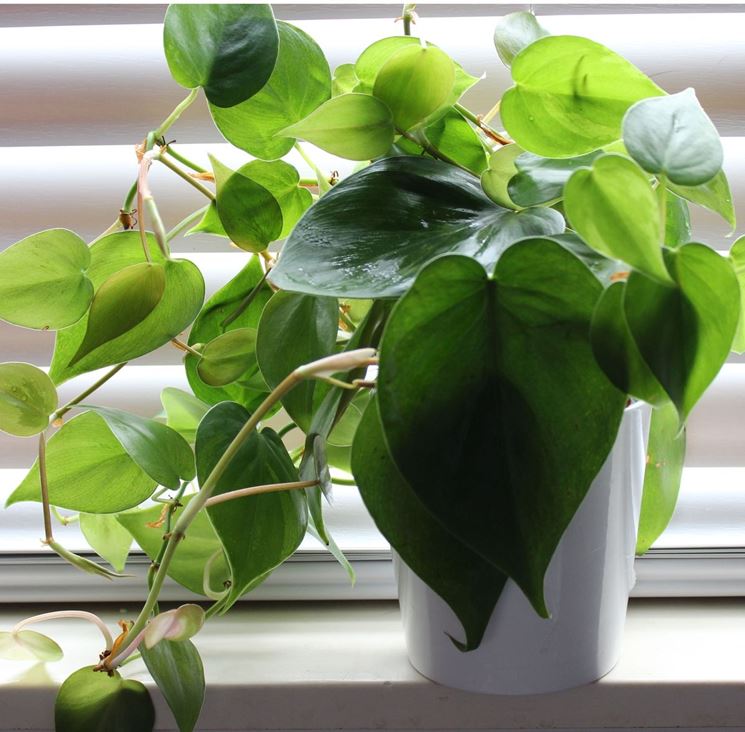 Philodendrons do not particularly like repotting, so let’s try to repot them not too often, and in any case avoid excessively manipulating the earthen bread around the roots.

They should be placed in a bright place; in the wild they live in the undergrowth of the tropical forests, where the sun’s rays do not reach them directly, but where there is also good diffused lighting; let’s therefore avoid exposing them directly to the sun, but also to keep our philodendron in a dark place and without ventilation, or it will tend to produce ever longer internodes, with a distance of several centimetres between the leaves.

They are tropical plants, which need minimum temperatures close to 10-12 ° C, so from the beginning of autumn should be kept indoors or in a temperate greenhouse, if we have an enormous philodendron we can leave it outdoors only if we live in a place with very mild winters, and in any case it is good to keep the plant in a sheltered place.

The shrubby species have similar needs to the climbing relatives: they love semi-shady but bright places, temperatures above 10-12°C, regular watering, in order to always keep the soil slightly moist, without soaking it too much.

A whole other story 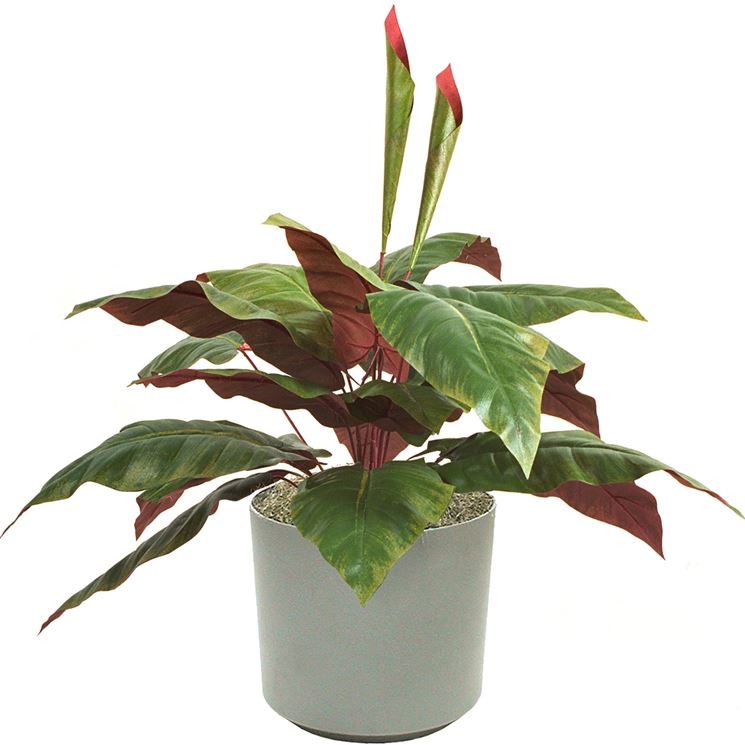 A plant very similar to some species of philodendron, especially the biggest ones, has been included in a species of its own for some years, is called monstera deliciosa, but is often still sold under the name of Philodendron pertusum. It is a climber that can reach very large dimensions, with enormous leaves, showing deep incisions and sometimes even large perforations, of a glossy dark green colour.

The cultivation of the monstera is very similar to that of the philodendron, although it is a plant that over the years reaches a very large, easily exceeding two meters in height and breadth. For this reason, if a “normal” philodendron is recommended for the cultivation in any apartment, for cultivating a monstera in an always healthy and luxuriant way, it is necessary to have at disposal a big living room, a covered terrace, or a real temperate greenhouse.

Otherwise we will be forced to prune the plant periodically, to contain the exuberance.

Colour of the flowers

Ideal temperature in the growing season

For green plants, every 15 days

They are plants that fit well in the apartments, because they are very tolerant. In winter we should generally ensure a temperature above 13 ° C, while, during the growing season, it will be good to keep as much as possible between 20 and 25 ° C.

They like very bright expositions, but, as for all undergrowth plants, the direct sun must be absolutely avoided, otherwise they will dry up and burn the leaves. During the summer it is possible to move the pot outside, in an area protected from too much light and from currents. However, a shaded exposure rarely damages them: it only affects the growth rate and the distance of the internodes.

From April to September, irrigation must be frequent, compatible with temperatures and always waiting for the surface to dry. In winter, on the contrary, it is a good idea to be more cautious and wait for the substrate to become rather dry before repeating the operation.

In any season (and especially in winter, if we heat a lot using heaters) it is important to keep the ambient humidity high with special appliances or through frequent vaporization of the leaves and the aerial roots.

We prefer to use non-calcareous water. 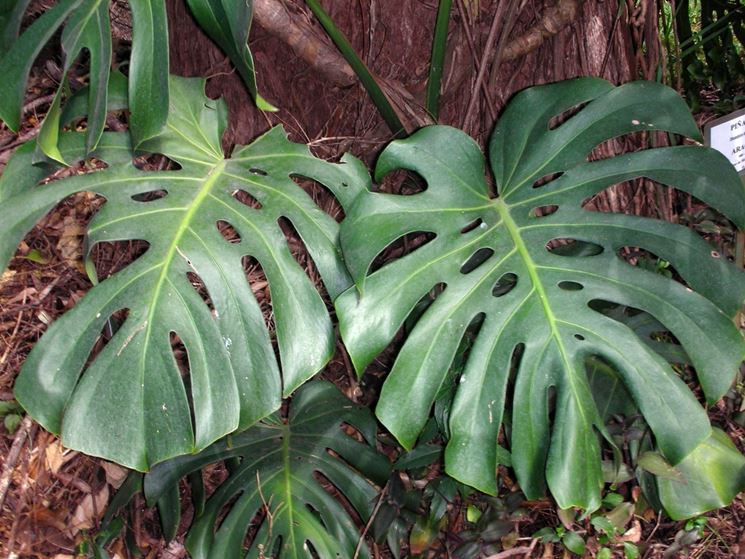 The suitable substrate must not overheat, but must always be able to maintain a slight humidity. A mixture of soil, leaves, peat and a bit of sand is all well and good. A small percentage of clayey garden soil may be useful.

During the summer season (and also in winter if we warm the room) we give every 15 days a liquid fertilizer for green plants, rather balanced. Granular fertilizers or sticks or foliar administration are also good.

If we revive every year and want to limit growth, however, we can also abandon this practice.

Pruning, cleaning and selvedge of the philodendron

These operations are carried out at the end of winter. We eliminate from the philodendron the shoots or the old or damaged leaves. In the decumbent varieties, it is useful to file the stems in order to stimulate the emission of new ones, obtaining a full specimen both at the bottom and at the top. 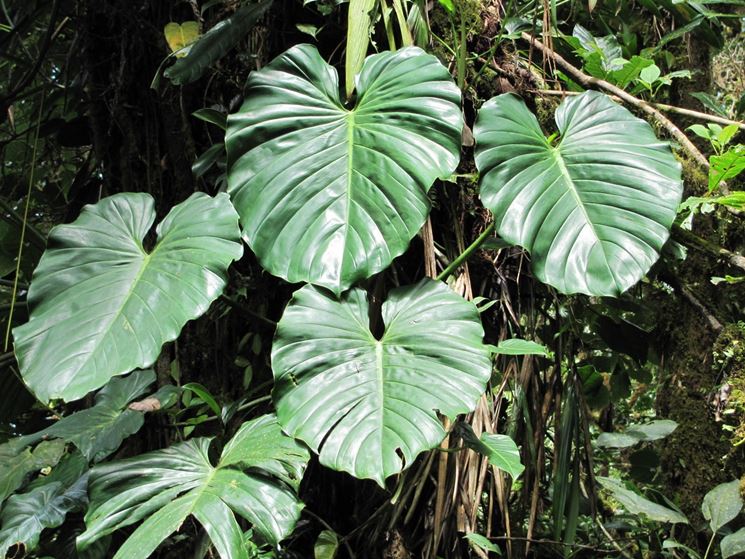 The philodendrons are rather healthy, but occasionally they run into physiopathies, mainly due to cultivation errors: we will see the leaves withered or dried. The most common problems are poor or excessive watering or too low temperatures. If, on the contrary, dark spots appear, the probable cause is the grey mould. Let’s extract the plant and repot it, eliminating the compromised parts and completely replacing the substratum. Let’s do some doses of Phosethyl-aluminium.

The most frequent parasites are cochineals and red spider mites, to be fought with specific products.

The philodendron, due to its ease of cultivation and beautiful foliage, is one of the most common plants in our apartments. For this reason in the nurseries are available many species and varieties, different in size, bearing and even in the coloring of the foliage.

Here are the most popular.

The most widespread and best known of all is certainly the philodendron scadens, characterized by climbing or falling portent. It has heart-shaped, small leaves, along the whole stem, carried on long and elegant petioles. If used as a climber, it needs robust supports. It tolerates well the low temperatures (up to 8°C). There are several varieties with different colour or variegated leaves.

Also known by the most correct name of Monstera. It comes from the rain forests of Mexico and in the right conditions can reach large size. Particularly decorative for the leaves, large in size. As soon as opened are heart-shaped and compact, light green. With time, they become darker and really amazing incisions and tunnels are formed.

Many varieties are available, including the small ‘Borsigiana’ and the white ‘Variegata’.

It is also very common, with leaves that are first sagittate, then oblong and wavy. They have a thick and fleshy consistency. In the right conditions it grows very quickly. The most common varieties are characterized by variegation or the back of the leaf carmine.

It can reach 2 metres of height and has beautiful shiny, sagittate leaves, up to 30 cm long, pink when young and then with copper reflections. 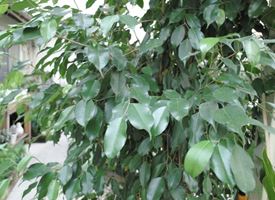 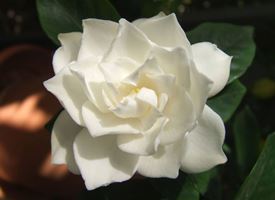 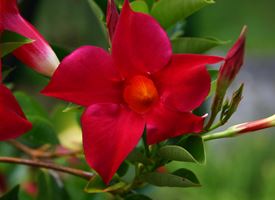 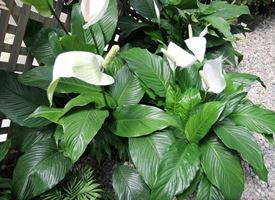